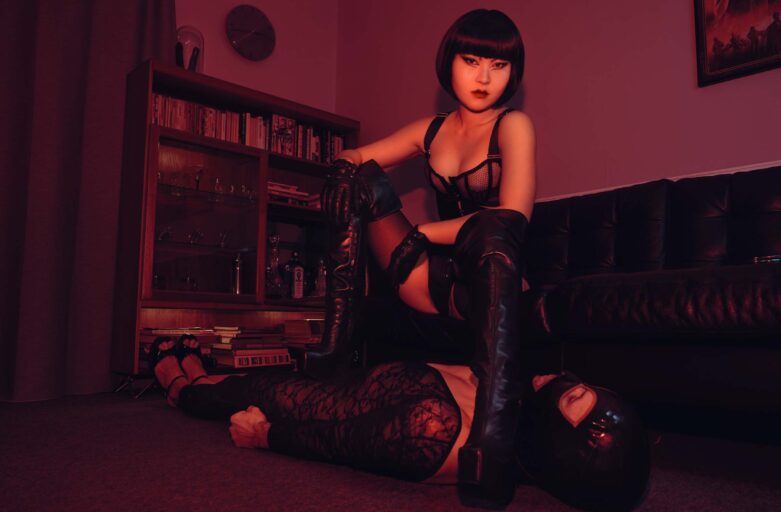 Beatrice was excited to meet him, it had been a while since she’d had a new boy to play with. Dressed in a beautiful red corset and a gorgeous red cape, she hopped off the bus and set off down the street. It was late and dark already, but the bar she was supposed to meet him at was only about ten minutes walk, and she liked the fresh air.

A full moon, shone in the sky, but clouds were beginning to close in around it.

Cutting down an alley way, she thought she saw a shadow flicker behind her, but when she turned there was no-one there. Her mind must have been playing tricks on her.  Perhaps she was foolish for walking here alone late at night, but it was such a warm night, and she knew these streets like the back of her hand. Beatrice was sure she’d be fine.

She turned right out of the alley way, then bang!

She was almost knocked to the floor by a great hulk of a man dressed all in black, rushing in the opposite direction. He was huge, at least six foot tall and clearly spent way to much time at the gym. He smiled a big teethy smile and looked down at her.

“That’s a really pretty cape you’ve got there, what’s a girl like you doing walking the streets at night alone, don’t you know there are dangerous men around” he said, chuckling to himself.

Who the fuck was this guy she thought?

“What kind of a name is Wolfie?”

“Maybe I could buy you a drink, would a drink let me see what’s under that red cape of yours?”

Urghh, god, what a letch she thought.

“I’m sorry babe, I’m off to meet a date at The Cabin, you know the bar around the corner from here. Just next to that awful hipster cereal cafe.  Seriously who thinks that eating corn flakes makes a date night?”

“Too bad, I’d eat a pretty thing like you alive” he replied “Well I hope we’ll meet again some time” with that he slipped off into the shadows again.

Beatrice set off again towards the bar, but must have taken a wrong turn somewhere. The clouds had closed in and it was really dark now. Pulling out her phone, she called up google maps, but could have sworn she saw something move out of the corner of her eye again.  Was it that big dude? Was he following her? Surely not.

Looking at her screen, she realised that she’d gone totally the wrong direction, and would have to cut through another few alleys to get to the bar. God, this was playing out like one of those awful TV dramas she thought as her heels clicked on the deserted street.

In the shadows the big guy, who had indeed been following her quickly realised that she’d clocked her mistake and was heading to The Cabin.  He didn’t have much time to get this done, but if he ran he might just pull it off.

Bursting in through the doors of the pub, he scanned the room. It was a pretty dingy bar, with lots of dark corners. The gentrification of the area clearly hadn’t yet hit The Cabin, and it was only half full. There was a guy sitting at the bar, who glanced up eagerly when he heard the door.  That must be him, he was slim in a tartan red suit, and looking nervous.

He strolled over, puffing out his chest and pulling his most intimidating face.

“Are you waiting for a date? A cute girl called Beatrice, I’m afraid she’s had to cancel”

“I’m a local here, and that’s my spot, so fuck off will you, she’s not coming”

With that Wolfie took his place and sat in wait for Beatrice to arrive.  This was almost too easy he thought to himself.

A few minutes later Beatrice walked into the bar. As she scanned the room, her heart sank, not only was he not here, but that big dick she’d bumped into in the street was sitting grinning at the bar.

“Beatrice” he called out, “It looks like it’s just you and me tonight, why don’t you pull up a chair next to me, and we can get to know each other better, I’ve ordered you a double, your little date ran off.  I think he was a bit scared of me.”

That was it! Who the fuck was this guy she thought, and strolled over to him.  Let’s see if he really is the big bad boy he was making himself out to be.

She forced a smile and stroked his ego.

“Really? He just ran off? You’re really quite an intimidating guy aren’t you? Don’t get me wrong, I mean I like that in a man. A real man, a man’s man”.

He was grinning from ear to ear with that big toothy grin again.  She was going to enjoy this.

“Say, big bad Wolfie, why don’t we skip the drinks and take this up a notch, follow me”.

She flipped back her cape and revealed her gorgeous red corset underneath, his eyes nearly popped out of his head, as she span on her heels and walked towards the toilets. “Well come on then Wolfie”.

He rushed after her and followed her into the toilets, locking the door behind him. This was going to be too easy he thought to himself.

He took a big stride towards her and grabbed at her arm, but before he knew it, she’d flipped under him and had pulled his arm up behind him in a half nelson. Yanking it up, she forced him to bend over and his head hit the wall, he was out cold in seconds, overpowered by the woman half his size.

As his vision blurred back he tried to move and realised that she’d handcuffed him to the urinal.  He roared out at her “what the fuck, what the fuck are you doing you little fucking bitch”

“My what a deep voice you have wolf” she replied “all the better for gagging to get you to shut the fuck up!”  With that she pulled a big penis shaped gag from her handbag, and rammed it down his throat in a flash. He was so shocked with the rubber cock sliding past his tonsils that he froze, and in seconds it was buckled on tight.

“mmmrrrrrrrrrrgh” he yelled, but no-one would hear him

“My what big eyes you have wolf” she said, looking into his saucer sized pupils. Clearly this was the first time in his life that anyone had over powered him. It was usually him using his might to overpower women against their will.  “all the better for blindfolding”. And she pulled a blindfold over his eyes.

He started to struggle again, and she was worried he’d pull the urinal clean off the wall, but it held tight.

“I know what your game is Wolfie, I’ve come across thousands of dicks like you, you think you can use you might to get what you want, but this little red riding hood is going to teach you a fucking lesson, I’ll be the last woman you ever try to molest”

“My what a big dick you’ve got Wolfie” she said, pulling out his cock and fondling his balls. She heard a different type of muffled noise from his gag this time. But blindfolded as he was, he couldn’t tell what she was doing. Her hand all over him felt lovely, her grip was as tight as a vice. But then he heard a click.

“there we go, all locked up nice and tight for me, welcome to your new life Wolfie, locked up in little red’s chastity device”

His feet kicked out, but with his trousers around his ankles, they were as good as bound.

She then kicked him in the crotch and he instinctively rolled over to avoid any more blows. His face landing in the piss filled urinal. Trying to pull back, on all fours on the floor, chained to the pipe he was finding it impossible to tell where she was. His bare buttocks up in the air, he was struggling like a chained animal.

That’s when he felt it. Cold, wet and hard, it had slid right in with her first thrust.

It felt like it was ripping him in half, but he couldn’t see, and couldn’t move. Her hands grabbed his hips and she pulled him onto her. Impaling him on her red strap-on cock. This time she definitely heard him squeal through the penis gag.

“Fuck you Wolfie, Fuck you, I was due to meet a lovely new little submissive tonight, and you fucking ruined it!”

“Well this is what you get when you fuck up a dominatrix’s date.”

With that she went at him, hammering her cock deep into him, his blindfolded face bashing into the urinal and splashing with piss. The rubber cock forcing him to gag every time he tried to scream.

Unleashing her rage on him, he didn’t stand a chance, and was soon a whimpering mess on the toilet floor.

She pulled out, wiped her cock on his face, and he heard her heels click out of the room.

Beatrice walked back through the pub, and out into the warm night. Once outside, she looked up at the full moon and then tossed the key to his chastity device down a nearby drain.